It is now ten months since India’s vaccination drive commenced. In the context of global efforts to swiftly protect citizens from the pandemic, the period should be sufficient to judge its handling. Before we look at where we are today, it is vital to determine how we got here.

A Vaccination Drive Hampered By Inaction

The inexplicable paralysis that struck the Modi government in 2020 doomed the vaccination drive even before it began. By December 2020, just the US, EU, UK, Japan, Australia and Brazil locked up 1.7 Billion vaccine doses for their citizens. When the Modi government finally acted in January 2021, the purchase was puny (16.5 million doses, amounting to 1.2 percent of India's population) and far too late.

Source: Data from Duke Global Health Innovation Centre, the US, as quoted in: Mudur, G.S, “How India Landed in Covid Vaccine Mess”, 19 April, 2021, The Telegraph.

The government also conducted an unscientific authorization process. It rejected Gamelaya’s application to directly conduct Phase III trials, and asked Pfizer to conduct its trials all over again in India. It did nothing to overcome Moderna’s lack of interest in applying. This left Indians with just Serum Institute of India (SII) and Bharat Biotech. SII was handicapped by the 300 million USD grant it took from the Gates Foundation, binding it to supply to low and middle income countries globally. Epidemiologists were astonished by the approval Bharat Biotech received, effectively vaccinating people in a Phase III trial. The severely delayed process and quality issues meant that COVAXIN constitutes just around 10 percent of administered vaccines. By May, the Modi government floundered in such dire straits that it informally banned vaccine exports, forcing SII to renege on international commitments.

Modi and his ministers declared victory over COVID-19 in January 2021; they might have unreasonably assumed that India would not see a second wave. Dr V K Paul, Niti Aayog member, claimed “Most of our highly populated districts and cities have had their run of the pandemic by now... and may have what you like to call herd immunity, to an extent.” The vaccine rollout tragically took a backseat to religious festivals and election campaigns.

It was bad enough that the Modi government ignored professional warnings about the need for vaccination. It proceeded then to make a total mess of the drive. The first phase was to cover 3 crore health and frontline workers by April 2021, but only 37 percent were fully vaccinated by 19 April. Needless to say, the Modi government later missed its next milestone: 300 million people fully vaccinated by August, achieving only 78 percent.

Having realized that both SII and Bharat Biotech supplies were drying up, the Modi government, in a shocking abdication, decentralized vaccine negotiations and procurement in April. This move was almost certainly to deflect criticism when shortages manifested. The central government claimed it was acceding to state demands, but they had asked just for freedom to decide distribution of doses! This further crippled the states by clubbing them with private hospitals. The latter promptly bought up supplies at higher prices, which eventually remained unutilized, while state vaccination centres ran out of doses almost daily. The Supreme Court finally called the policy prima facie irrational in June and ordered the central government to explain. Rather than replying in court, the centre reversed its decision. However, two months of the chaos had done irreversible damage.

The Hype and Fake Narrative

The unedifying spectacle of BJP-ruled states sycophantically inflating vaccination counts on the prime minister’s birthday only demonstrates that even BJP and he feel the need to combat the widespread conclusion that they failed in handling the pandemic. The Modi government repeatedly presents a fake narrative about the vaccination drive, calling it the world’s largest and fastest. In reality India lags many countries in terms of full vaccination as a percentage of the population—the only epidemiological metric that matters. 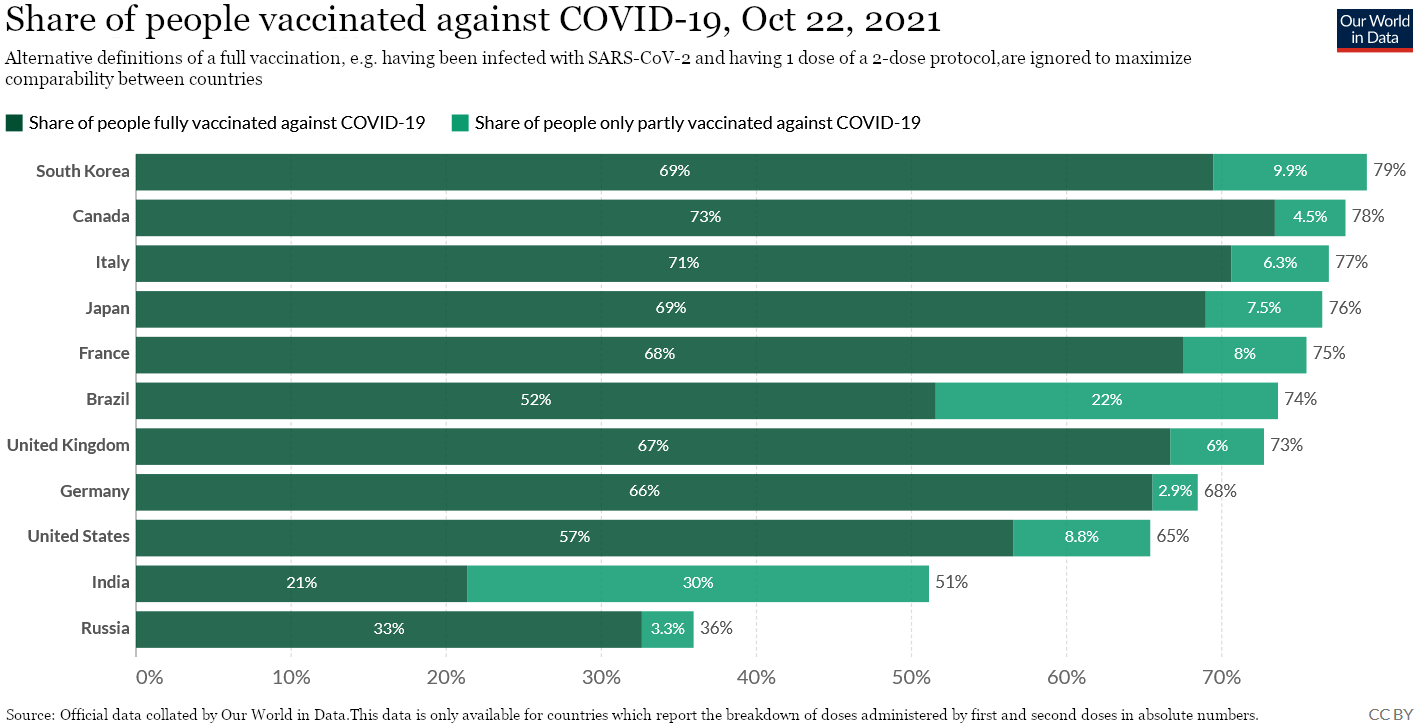 Besides, most countries prioritized full and partial vaccination equally. Until 27 August, India was the only large country with less than 10 percent of its population fully vaccinated. This might have been due to the Modi government realizing that they had publicly set an unattainable target for themselves. Ensuring that most of the population is partly vaccinated by 31 December, 2021, could be to deflect criticism when the deadline passes.

To compound the misrepresentation, the Modi government’s efforts were neither the fastest nor the largest. For instance, comparing the first 100 days or so of the drive in the USA and India clearly establishes that the USA reached every single milestone from the first million to 210 million doses faster than the Modi government managed. In fact, it was not until 27 June, 2021, that India finally overtook the USA in absolute doses administered. By that time, the US was nearing 50 percent fully vaccinated, while India was still at 4 percent of its population.

Even though the population of the USA is just a quarter of India’s, its drive was faster and the absolute counts larger until July 2021.Consider the one country whose population actually is comparable to India’s: China. China’s drive has been much faster—the Modi government had managed to achieve just 33 percent of China’s total count as on 10 September, 2021. 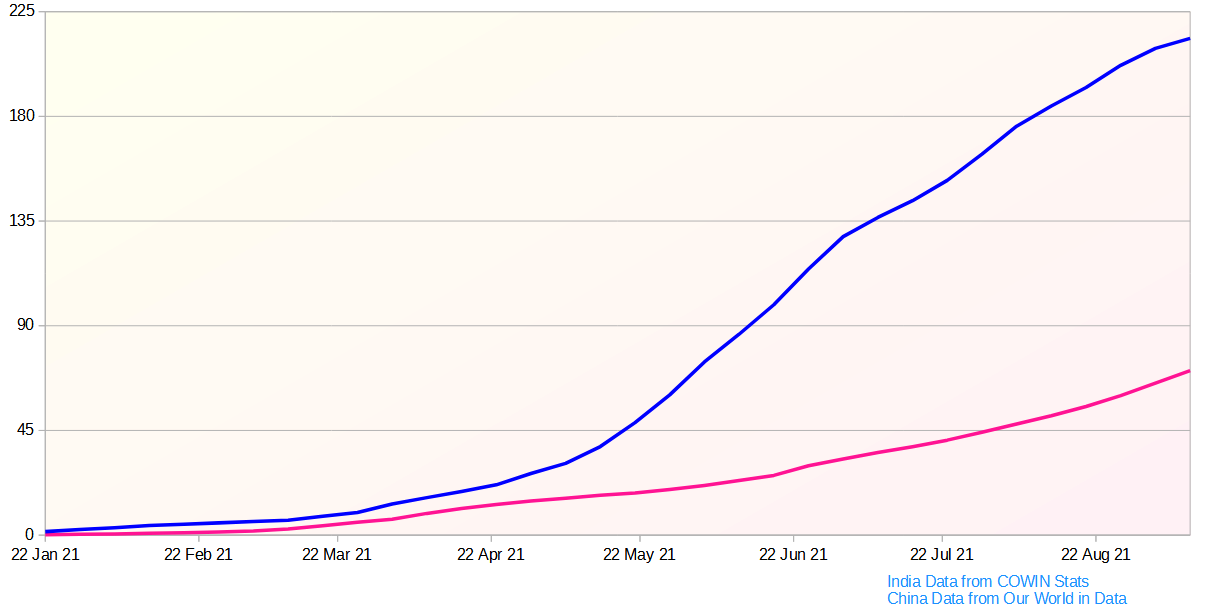 The consequence of the delays in 2020 and the subsequent mismanagement are that the Modi government is unlikely to meet the target it announced in the Supreme Court and publicly—fully vaccinating the eligible by 1 January, 2022. 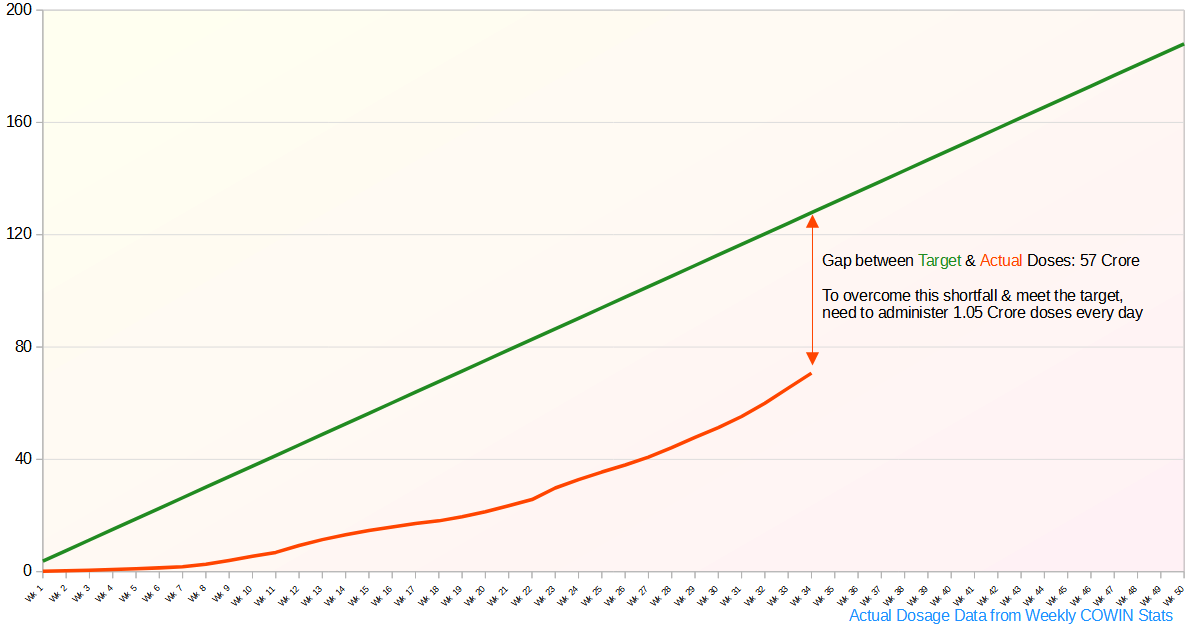 The adult population of India is estimated to be anywhere between 90 and 100 crore. Meeting the goal would entail administering nearly 1 crore daily doses for the next three months or so, a feat not achieved so far.

Equally grim is the ratio between fully and partially vaccinated Indians. As of 20 August, 2021, only 12.69 crore were fully vaccinated, while 42.57 crore received one dose. Nearly 4 crore Indians have not received a timely second dose. This is despite the government doubling the interval between Covishield doses in May. No one has studied whether the vaccines are efficacious enough even if administered beyond the recommended interval.

On 21 October, 2021, India went past the 100 crore administered doses mark. For context, China had achieved that milestone on 19 June, 2021, and has, at the time of writing this, administered 224 crore doses. As there is no other country on the planet whose adult population requires more than 60 crore doses in a two-dose regime, it is futile to make comparisons with any of them.

Moreover, the success of each country's vaccination drive depends on the percentage of its population that has received both shots: that determines how safe its population is from infection and severe symptoms. By that metric, the numerous mis-steps of the Modi government meant India lagged behind practically every other large country. Achieving the landmark was tinged with grief. If only the Modi government had, instead of declaring premature victory, acted scientifically, procuring vaccines in the second half of 2020, millions of Indians might have been saved from the need for hospitalization, gasping for oxygen and even dying in the second wave.

Meanwhile, the third wave still looms and the scientific community worries over the virus mutating further and completely escaping the vaccine. The rest of 2021 is going to be quite tense on the pandemic front—the health and economic well-being of all Indians is at stake.