Chhattisgarh stands out as a true success story in mitigating the spread of the Covid-19 virus. In medical terms, the infection and mortality rate due to the virus have been low in this state. Importantly, the people−centric and innovative initiatives of Chief Minister Shri Bhupesh Baghel’s government have also softened the economic and social impact of the pandemic on the common people.

How Did They Do It?

Dr Shashi Tharoor, MP and Chairman of the All India Professionals’ Congress, recently spoke to Shri Baghel on these issues on an online forum. He focused on three main aspects of successful governance. First, the positive steps taken by the government in combating the Covid-19 pandemic. Second, the creative solution to implementing the Mahatma Gandhi National Rural Employment Guarantee Act (MNREGA) and keeping it operative during the lockdown. And, third, the success of the Rajiv Gandhi Kisan Nyay Yojana (RGKNY) in the state.

Dr Tharoor observed that CM Baghel had hit the ground running since he formed the Congress government in the state in 2018.

The execution of the novel RGKNY was a resounding success, but before that, it was essential to learn more about Chhattisgarh’s commendable response to Covid-19.

The national lockdown dried up many sources of income. People lost jobs, and a large number of migrant workers returned home. In response, Chhattisgarh has generated the maximum employment under MNREGA by any yardstick, leaving neighbours Madhya Pradesh and Uttar Pradesh far behind. Dr Tharoor requested the Chief Minister to share how they used MNREGA while maintaining the lockdown restrictions.

Shri Baghel said they began brainstorming their Covid-19 strategy in February — months before the crisis became widespread. They had concluded that without vaccines and treatments, safety lay in prevention. So, Chhattisgarh was already locked down by March 25, when the national lockdown became effective. Chhattisgarh’s lockdown was more than a simple lockdown — it focused directly on people’s needs and problems.

Its key features were:

When MNREGA work started, innovative methods were used to manage ‘social distancing’, which they called ‘physical distancing.’ Husband−wife teams were given jobs on 100 square feet plots, and the next group had a plot at a distance of 10 feet. So families worked together while maintaining distancing norms. Earlier, the MNREGA employment figure had never crossed 15 lakhs. By mid-2020, it was 26 lakhs.

As people undertook physical activity, they were less tense. As they had access to money, they could stay home. By ensuring gainful engagement and financial security, the rural areas of the state remained largely unaffected. When state and district boundaries were sealed, the villagers sealed their borders on their own accord as they understood the benefits and had access to income and food.

Appreciating the steps for Covid-19 management and the remarkable effort of successful implementation of MNREGA even during the pandemic, Dr Tharoor urged Shri Baghel to further discuss the state’s robust Covid-19 testing programme which has been showing good results. In testing too, Chhattisgarh has done better than its neighbouring states.

Shri Baghel explained that since the Covid-19 virus first spread from people who had come from abroad, the first thing his government did was to trace, identify, and immediately home quarantine about 2,100 such people at a very early stage. Health and police authorities conducted regular checks on these people and those who tested negative were freed from quarantine.

Chhattisgarh conducted similar contact tracing for Markaz participants too. For migrant workers who returned from other states, 16,000 quarantine facilities were set up in the villages.

Later in the conversation, the Chief Minister also acknowledged the efforts of various groups in dealing with the pandemic: “In the battle against Covid-19, I must appreciate unsung volunteers like the Youth Congress, social organizations, All India Professionals’ Congress, industrialists, businessmen, NSUI, and Mahila Congress, who stood together, providing food and assistance (to those in need). We welcome guidance, advice, and feedback from all quarters.”

Devil Is in the Detail

While speaking about migrant labourers, Dr Tharoor highlighted the news about how Chhattisgarh was the only state that provided footwear to migrant workers crossing the state. Shri Baghel explained that because the state is bound by seven other states − Orissa, Maharashtra, Madhya Pradesh, Telangana, Jharkhand, Andhra Pradesh, and Bihar − it experienced significant migrant movement. “It came to my notice, via a Facebook post, that many of them had no footwear and were going barefoot.” Immediately they were provided vehicles, food, and also chappals. A large number of social organizations voluntarily helped in this effort. This effort was much appreciated.

Similarly, the success of the Haat Bazaar Clinic Scheme for the tribal population was also based on close observation of local conditions. This scheme has been particularly successful in the Bastar region, which is Naxalite infested. Unless there is an emergency, residents in this area do not visit hospitals. But the same residents regularly visit Haat Bazaars (markets). So the government created ‘Haat Bazaar Clinics’ utilizing the District Mineral Fund (DMF). This scheme has benefitted lakhs of people. No deaths due to seasonal illnesses were reported during the previous rainy season and that is the true measure of the scheme’s success.

Taking forward the discussion on RGKNY, Dr Tharoor discussed how it was very important for social security and strengthening of the rural economy. Shri Baghel explained that Shri Rahul Gandhi had promised loan waiver to farmers during his campaign for the assembly elections. After the elections, his government worked hard to fulfill that promise. When Rahul Gandhi visited the state next before the Lok Sabha elections, “rin mafi praman patra (certificates of loan waiver)” were provided to the farmers, the procurement price for rice/paddy was publicized at Rs 2,500 per quintal, and the RGKNY was announced for the first time.

However, the Central government refused to induct the paddy into Food Corporation of India (FCI) coffers, should Chhattisgarh (or any state) give bonuses to farmers. This would have resulted in a loss of thousands of crores of rupees for the state’s farmers. But the state government managed to get the decision reversed by providing the written assurance to buy at support prices. This year, 84 lakh metric tons of paddy was purchased from 19 lakh farmers.

The government included paddy, maize, and sugarcane in RGKNY. Paddy and maize farmers were compensated at Rs 10,000 per acre and sugarcane farmers at Rs 13,000 per acre, which is the highest in the country. The Central government’s support price of sugarcane is Rs 261 per quintal. However, in Chhattisgarh, the farmer will effectively get Rs 355 per quintal. By 21 May, Rs 1,500 crores had already been spent on the scheme.

Elaborating further, Shri Baghel mentioned that Chhattisgarh is now employing 26 lakh people via MNREGA, 19 lakh families are benefiting under RGKNY, and in tribal areas, Self Help Groups are working with 12−13 lakh families. The government is helping adivasis, workers, and farmers.

Shri Baghel opined that by initiating schemes that give money to farmers, labourers, workers, and the tribal population, the state’s economy has also gained. The wheels of the industries can spin, and the functioning of the markets can occur only when people have purchasing power. More so, in these times of Covid-19, the money must go directly into the needy person’s bank accounts, as this will give a spurt to economic/industrial processes.

“A state cannot progress if we do not care for our underprivileged. It is essential in a state like Chhattisgarh, where 40 percent of the population is below the poverty line, 35 percent of children are undernourished, and 40 percent of women are anemic. Employment, education, and health are our top priorities. We are now working on extending the RGKNY to the landless labourers.”

With so many schemes being taken up, Dr Tharoor asked Shri Baghel about auditing to see if the money was reaching the right person. Shri Baghel informed the audience that the state already has a fully computerized system of paddy procurement through cooperatives. Anyone can check any information at the click of a button. Under RGKNY and other schemes, all payments are made directly to the beneficiary’s bank account. Implementation is fully transparent.

Shri Baghel pointed out that his government’s programmes and approach are guided by the vision of late Prime Minister Rajiv Gandhi who had said that 70 percent of the country’s population lives in the villages, and until these communities are uplifted, India will not progress. Congress leader Rahul Gandhi has also repeatedly spoken about eliminating the rich−poor divide. 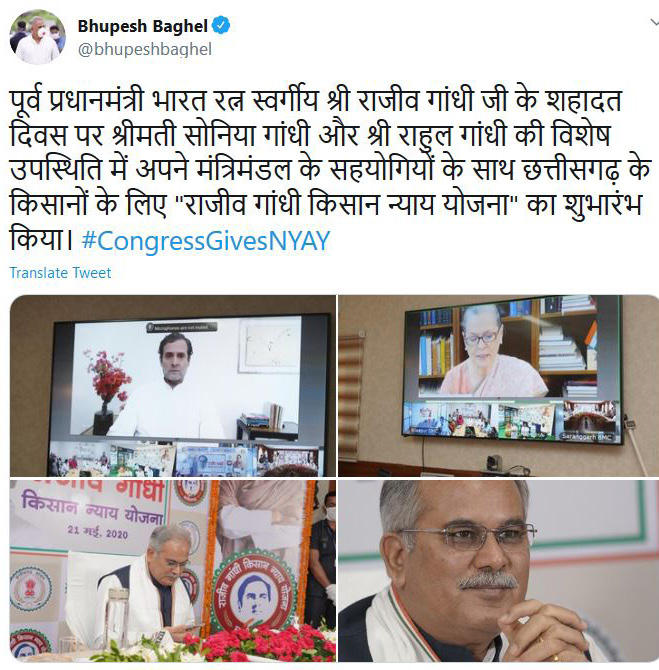