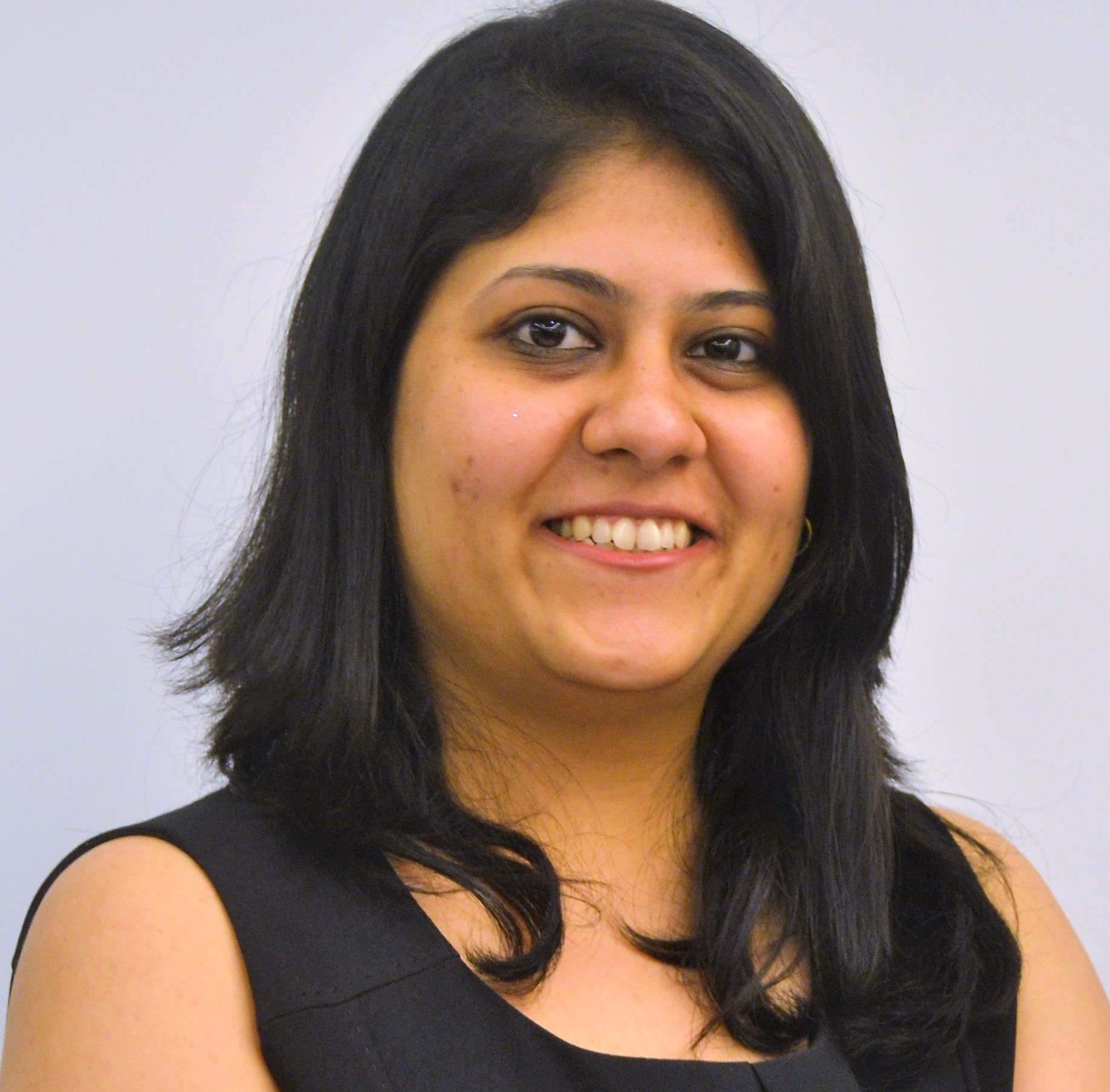 “I am multitasking, can I request to attend this VC as an audio call without the video?” requested a woman cutting vegetables while her four-year-old kid clung to her clothes as she spoke to her manager. This has been the story all over the country for working women during the “work from home” arrangement that most organizations had to switch to because of the Covid-19 pandemic lockdown and also thereafter, owing to precautionary measures.

It is immensely telling that in some industries and offices, recently several women heaved a sigh of relief when “work from home” again became “work from office” for them; they found the experience liberating and cathartic!

The Covid-19 pandemic caused havoc across the globe, affecting almost all industries and sectors in the professional realm. Every family/home bore the brunt of the pandemic in a direct or indirect manner. The new phenomena of “work from home” picked up really quickly as organizations scrambled to keep their employees on job and continue work in whatever manner was possible. Many saw the change as a boon, imagining that they would be enjoying the luxuries of home life along with their work; but for most of the female workforce, it was a troublesome scenario.

While a few companies immediately stepped up employee welfare measures like provision of laptops, audio devices, better Internet connections, and even special allowances, for most others, it was managing with what they had and some extra support that was totally unavoidable. For many women, this meant sharing the workspace (for example, the choice between the quieter bedroom or corner in the house versus the dining table) and work devices like laptops/computers, headsets, work tables, chairs, etc., with not just the male members of the family who were also working from home, but also children, who were attending school remotely.

It was like women reliving the societal set-up that millions of girls face during education, where familial and social support for them is always secondary to that for the male members of the family. The same power dynamic emerged now in the work domain as it shifted to the home space in physical terms.

As per a recent Oxfam report (16 January, 2020), Indian women and girls put in 3.26 billion hours of unpaid care work every day—a contribution of at least Rs 19 trillion a year, to the Indian economy. The same report quotes a 2017 NITI Aayog report in saying Indian women spend 9.8 times the time that men do on unpaid domestic chores. In a country with a high proportion of multigenerational households, women spend on average 4.5 hours a day caring for children, elders and ill or disabled persons, compared with less than one hour by men.

So millions of Indian women embraced this mammoth challenge, made further more critical by missing house help (house helps are the lifeline for most working women in the country) and increased drills of cleaning and sanitization during the pandemic, struggling to meet their daily work targets. The expectations and needs at work did not decrease, though!

Household helps themselves, also a part of the female workforce in the informal sector, were one of the hardest hit. Most of them lost employment for several months and faced severe poverty conditions, with no support from the government.

This strain on female professionals started showing its results in a spike in mental health issues among women, child care issues, and also domestic violence and other disturbances. In the work sphere, stress increased with increasing delays in meeting deadlines, sometimes even leading to women quitting their jobs, or leading to long working hours when they tried to make up for lost time after office hours. Thus, their overall mental and physical health suffered.

As per a Initiative for What Works to Advance Women and Girls in the Economy (IWWAGE) report (‘Impact of COVID-19 on Working Women’, August 2020), in the USA, there were 70,000 layoffs between the months of March 2020 and April 2020 out of which 60 percent were women and the most affected were younger women as they lacked the work experience to survive in a competitive job market. In India as well, service sectors with higher concentration of women such as tourism, hospitality, and aviation are expected to have had approximately 70 percent layoffs.

The Consortium of Indian Industries (CIA), which represents over 10 lakhs small firms, has reportedly said that women make up over 60 percent of the job losses (Reuters report on 3 August, 2021, ‘Coronavirus Likely to Lock India’s Women out of Job Market for Years’, by Manoj Kumar and Alasdair Pal). The same report also quotes the Centre for Sustainable Development at Azim Premji University saying 47 percent of female workers who lost their job between March 2020 and December 2020, that is, before the second wave of Covid-19 in April 2020, were made permanently redundant. The corresponding figure for male workers was 7 percent only.

Another report quoted a survey conducted by Women in Technology, Ace India, in November and December 2020, focussing on female professionals between 21 and 55 years of age, working in IT, technology, banking and finance sectors, in which 74 percent of them believed the pandemic has impacted female professionals more, with 49 percent of them highlighting that the burden of household responsibilities on women had increased (The Time of India report, 26 Feb, 2021, ‘74% Professionals Believe Women Were More Negatively Impacted by Covid-19: Survey’ by Sonam Joshi).

According to the Centre for Monitoring Indian Economy (CMIE), while most men recovered from their job losses by November 2020, women were not as fortunate and as many as 49 percent job losses can be attributed to them. Considering the percentage of women in the workforce, this means a very high number of women who lost their jobs (Mid Day report, 20 June, 2021, How Covid-19 Pandemic Hit India’s Female Professionals Hardest, by Aastha Atray Banan)!

One dimension of how this impacted female professionals can be partly gauged from a LinkedIn report that said the impact of Covid-19 on the sense of financial stability and confidence levels of female professionals has been a lot more negative than that of men. Their confidence level has declined four times more than men, according to the LinkedIn Workforce Confidence Index (New 18 report, 25 June, 2021, ‘Covid Second Wave Hit Women Harder, Twice as Worried about Jobs as Men: Report by LinkedIn’).

In the highly stressed business environment, and the layoffs that organizations had to resort to due to losses in business for cost cutting, women often became easy victims, wielding as they were the additional pressures of survival in their home and social life.

Women in the Informal Sector

Layoffs in the informal sector also hit women’s employment hard: 75 percent of women working in the informal sector lost their jobs during the Covid-19 lockdown according to an Action Aid survey , with small businesses like street vending being totally shut to the tune of 97 percent. The situation became more grim as the remaining barely surviving female workforce in the informal sector had to resort to borrowing or debt—either of the community or of money lenders—for their basic survival, as per a survey conducted by researchers at the Azim Premji University (‘COVID-19 Livelihoods Survey’). If the situation wasn’t already so abysmal, men in the informal sector, after the mass exodus from urban to rural areas during the lockdown, grabbed the MGNREGA related jobs as they were the victim of layoffs too! The graphic below depicts the person days worked by Women under MGNREGA in 2020-2021 compared to previous years. 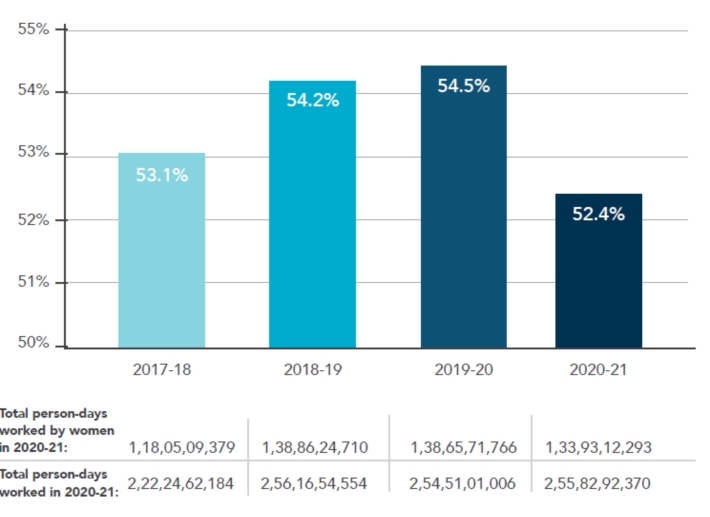 The government made tall claims of supporting poor women working in the informal sector through various Covid-19 transfer schemes but that remained just another hollow claim and a mockery of these women. As per a Yale Economic Growth Centre Report titled ‘Reaching India's poorest women with Covid-19 relief’, 176 million of these poor women are excluded from receiving any relief from the Central government which is tied to PM Jan Dhan Yojna benefits, and 70 million do not have ration card which excludes them from having any ration card benefits. Who in effect is receiving and benefiting from these schemes remains a question to be answered!

Another alarming consequence of the economic and social stress with restricted movements and cramped living conditions has been an increase in domestic violence. According to the National Commission of Women (NCW), India recorded a 2.5 times increase in domestic violence between March 2020 and May 2020 (The Hindu report, June 15, 2020, ‘NCW Records Sharp Spike in Domestic Violence amid Lockdown’, by Jagriti Chandra). The NCW also reported a 100 percent increase in incidents of domestic violence within a fortnight of the lockdown (Oxfam report, 3 August, 2020, ‘Locked Down: Domestic Violence Reporting in India during Covid-19’, by Kanika Arora and Shubham Kumar). Some women’s organizations reported that in the first four phases of the lockdown, they received more reports of domestic violence than they had in the last ten years for a similar period of time. Others indicated that many women were unable to report the violence, as they had less privacy and means to access help. The numbers have been alarming, especially considering that many victims wouldn’t have come forward to report such violence due to various reasons. The instances of domestic violence increased to such an extent that the government had to classify domestic violence shelter and support services as “essential”!

India as a country has huge gender-gap based employment. An OECD report shows we have an uphill task ahead of us (‘Women at Work in G20 Countries: Progress and Policy Action Since 2019’, paper prepared for the G20 Employment Working Group). The graph below from the report shows the gender gap in employment participation in various countries, including India.

Women in India have been facing all these problems earlier too; the pandemic increased their degree critically, making them not manageable for many. That has been the difference. But the situations created by the pandemic also served as a wake-up call highlighting all these problems for anyone who cares to see, making a strong case for the society and the government to take steps to make the lives of women easier. We acutely need reforms in social attitudes towards women in general and working women in particular, in various domains: professional, home, personal relationships, etc. And most importantly, to drive all this change, unflinching support from the government through policies and programmes is absolutely imperative.